a jade rabbit on the moon

I’ve been waiting for quite a few days to write about China’s Yutu lunar rover, but I wanted to post when the Jade Rabbit was actually on the Moon.  It’s up there now, crawling around taking pictures and doing science in the Bay of Rainbows, the first lunar robot rover since our blog’s official mascot, Lunokhod, in 1976.  There’s another Tank on the Moon!  Congratulations to everyone in the Chinese space program who worked on the Jade Rabbit program, and here’s hoping the Rabbit keeps going for a while.  The deep dust and lack of atmosphere means Moon rovers have comparatively short working lives compared to their Martian cousins, who can turn into the wind periodically to dust themselves off.

Here’s a little Jade Rabbit mosaic: a portrait of the Yutu, taken from its Chang’e 3 lander, a shot of the Rabbit’s first tracks in the Lunar dust as it rolls off the ramps, and one of the Jade Rabbit’s own images of the Moon. 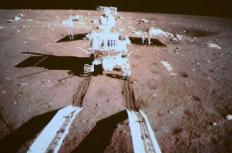 (images from Engadget.com, Yahoo News, and the BBC.)

This entry was posted in other stuff and tagged gadgets and technology, history and culture, outer space stuff. Bookmark the permalink.

2 Responses to a jade rabbit on the moon