Nothing can stop a writer from gathering research material on a project, even a long term project that has been running since the late 1970s and is almost certain to never see the light of day. 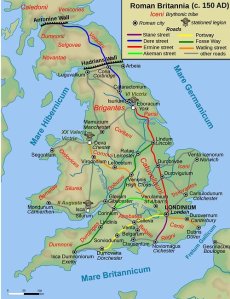 I’ve been “working on” an alternate history setting loosely based on Roman Britain since I was in high school.  And by “working on” I mean “thinking about” and sometimes “gassing about in bull sessions with fellow geeks”.  “Albion of the White Horse” has been a novel, it’s been a series of novels, it’s been a comic, it’s been a roleplaying game.  To make this happen, I was absolutely, positively going to live in England, or possibly Scotland, when I grew up.   At least, I was going to live there for several years, long enough to gather all kinds of firsthand observations of the places in the Albion stories, and if they were successful enough I was never going to come back.

Hmm.  Not a practical life plan in retrospect, although it kept me amused for a long time, until I settled down both much closer to home and much further away.  (And lost my taste for historical fantasy somewhere along the way, but that’s another story.) I am very happy with the Knotted Rope I have made for myself, and the half dozen related settings (chief of which is Kekionga) that I am actively working with.  I don’t expect I will ever set foot on the Fosse Way again in my life, either physically or in serious imagination, but, man, show me a good map of Roman Britain and I can’t help filing it away just in case.

Here’s to those back burner projects, and may they never be taken entirely off the stove.

This entry was posted in comics and cartooning and tagged a cartoonist's life, Kekionga and the Knotted Rope Universe, maps, personal blathering on, writing. Bookmark the permalink.