Pretty much the whole six weeks before Halloween. Halloween itself, fine.  But all the  buildup, and all the little decorating ideas from tumblr and Pinterest … 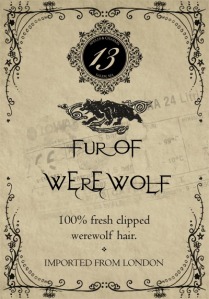 (from the Noakes Library tumblr, mostly curated by Iowa Ginsberg, but other people have posting privileges as well.)

Someone printed out about a dozen copies of this, very neatly, in sepia-colored ink on fake parchment, and double-sided-taped them to ziplock bags full of grey and tannish hair. Made a great addition to the milk and sugar* baskets at all the coffee stations in Lower Noakes.

Last time must have been a really great full moon, because all the Prof did when he found it was to open the bag, take a sniff, and say “Werewolf?  It’s not even plain wolf. Dog.  And it’s not imported, either. Poor effort.”  Everybody stood around hoping he would actually put it in his coffee and drink it, just to be a tough guy, but Iowa said later she was glad he didn’t.  If you’d ever seen him take his hairball remedy even once, she told us, you’d be glad to never see it again.

*The milk and sugar baskets contain neither actual milk nor actual sugar.  Discuss.

(image via tumblr by way of Pinterest, originally from cocoandbella.blogspot.com.)

This entry was posted in comics and cartooning and tagged FICTION!, Kekionga and the Knotted Rope Universe, werewolves. Bookmark the permalink.