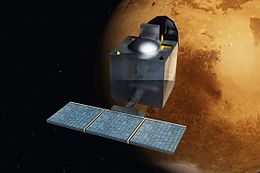 Good news from Mars, space people.  Mangalyaan (“Mars-craft” in Sanskrit), launched by the Indian space agency ISRO ten months ago, has arrived safely in Mars orbit and begun transmitting data.  This makes India the first Asian country to reach Mars, and the first country ever to place a satellite into orbit around the Red Planet on the first try! You go, India.

Yes, this blog is a particular fan of planetokhody/rovers, but we recognize that orbiters are an essential first step to getting wheels and cameras down onto the surface of other worlds.  So any orbiter is a cause for celebration, and a first orbiter from a new visitor is even more so.

US orbiter MAVEN, tasked with researching the history of the Martian atmosphere,  is also a newcomer to the skies over Mars this week.  Maintain a safe distance, you two.  It’s getting crowded up there.

CNN (always a good place to go for space coverage) has an article listing “Five Things to Know About India’s Mars Orbiter“, which includes several videos and the first Twitter “exchange” between Mangalyaan in orbit and rover Curiosity on the surface.  Of more serious import is a discussion of India’s policy of “frugal innovation” and of the relationship between the Indian space program and politics at home.

(artist’s rendering of Mangalyaan from the Wikipedia. Read about atmospheric probe MAVEN here.)

This entry was posted in other stuff and tagged history and culture, outer space stuff. Bookmark the permalink.