best of the drawing of the day, week 158–a chair and a felinoid 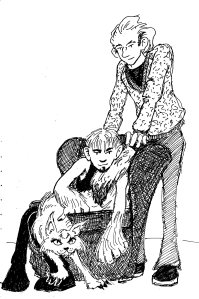 Yes, there are two guys here (baseline humans, more or less), but the stars of this scritchy-scratchy pen drawing with its strongly triangular composition are the wingback armchair and the white felinoid.

I’ve never drawn a wingback chair before, and it sort of shows. But it really does seem like the person with the big hands is actually sitting in it, sideways, with his behind in the far corner and the felinoid (they are large creatures) tucked in along side him with the front of its long, long body trickling over the edge of the seat.   A variety of small people with crooked, or at least awkward, legs in black leggings and boots have been living in my sketchbook for a while, as have rawboned handsome men with wavy hair brushed back.  Are new characters developing, or are these faces for characters I already know, but I just don’t quite recognize them yet?

This entry was posted in comics and cartooning and tagged art post, drawing of the day, drawing tools, Kekionga and the Knotted Rope Universe, writing. Bookmark the permalink.