What’s this when it’s at home, then?

The bold white title on the tall prism housing says it all: it’s a current Pentax DSLR.  This one is a KP, compact, 24 mp crop sensor, designed to get the best out of prime lenses, especially in low light: an exciting and challenging camera.  And as of yesterday, it is the latest addition to my stable, and probably the last one for a long time.  Never say never, of course, but the addition of a second body to the Pentax kit really gives me pretty much everything I want on both sides of the mirror/mirrorless line.  Unless something falls in the lake, I’m done for a while.  Heck, it’s going to take me months just to get this one figured out; it’s by far the most advanced camera I’ve ever picked up, much less owned and used.  But that’s just what I need to amuse me during the winter.  (Many thanks to the person who gave me this very generous “birthday/Christmas/next birthday” present.)

Most camera companies identify their models by close to identical strings of letters and numbers and it’s almost impossible to keep them straight, especially when talking about them, so I give my cameras names.  The KP will be known as “Kap”, short, of course, for Kaptain Amerika.

And what better sample of Kap’s output to share than this little portrait of his namesake in the form of Desktop Cap.  (Photo geeks, please note the ISO and the relatively light and smooth noise.  Old photo geeks, remember when ISO 1000 film was the fastest thing in the universe and it was grainy as all heck.  I know there are tweaks I can apply to this camera to improve the high ISO performance even further, once I figure them out.) 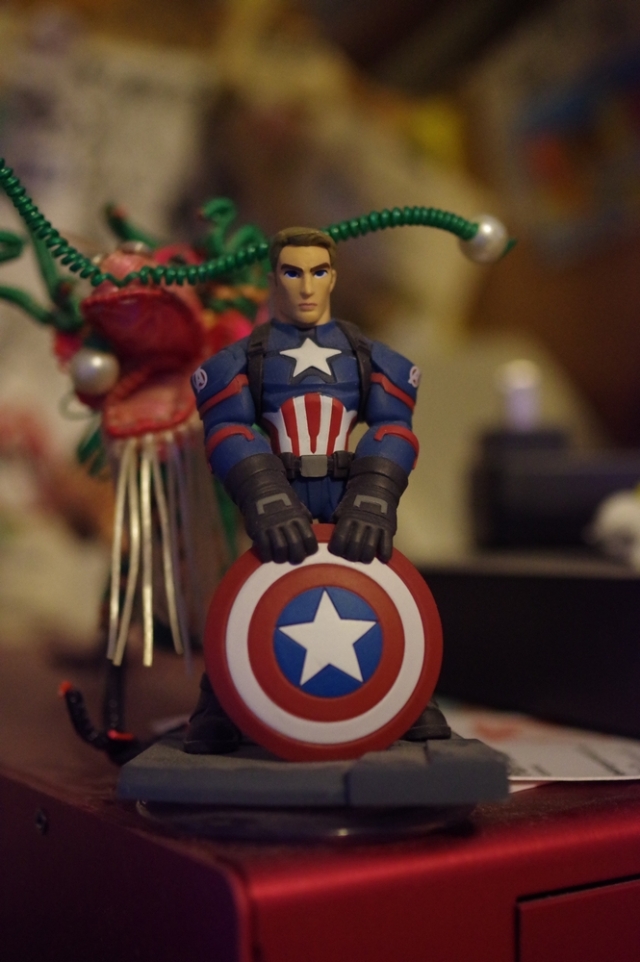 This entry was posted in photography, writing and tagged gadgets and technology, photography, superheroes, writing. Bookmark the permalink.