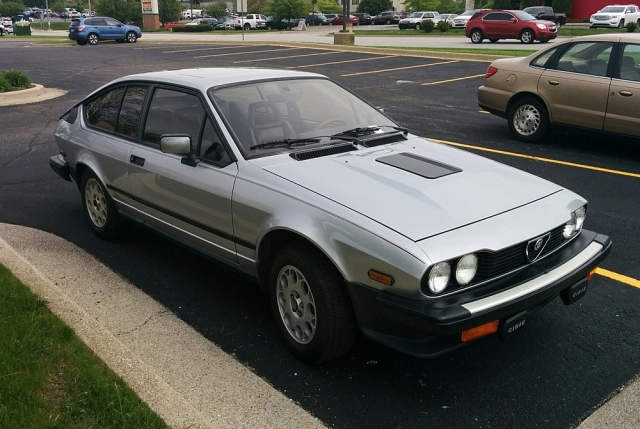 The distinctive shape of this “late 20th” Alfa called to me from across the parking lot at the big box store.  My first take was “Alfetta”, and I wasn’t entirely wrong: GTV6 2.5 was the name given to late model six cylinder versions of the 4 cylinder Alfetta, but they are definitely members of that family. The Alfettas were famous racing cars in Europe, excelling on the Touring Car circuit and in rallies. 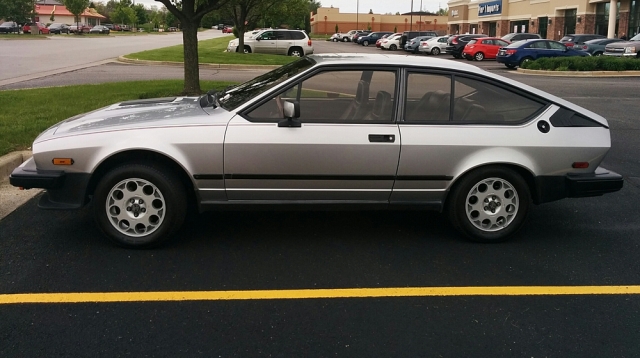 There were two series of GTV6 2.5s: 1980-83 and 1983-87.  I am pretty sure this is an example of the later car.  Unfortunately, the few minutes I had available to hang around it with the phone camera failed to yield the return of the owner, who I hoped would be willing to answer a few questions (like “what year?”) in exchange for my admiration for their rocking Italian Eighties ride.  I was in my twenties when this car was new, and I admit that as the years go by the design language of the period is looking better and better to me.

Sighting: Alfa Romeo GTV6 2.5, series 2 (?), silver over black, definitely a driver.  8 points base for an unusual, appealing, and fairly rare car, +1 Italian, +1 cool old car being driven on errands, -1 silver car not of German origin, for a total of 10 points.  Great spot!

(Photographed with the phone camera on the old Nexus 5 on a cloudy spring afternoon, edited first on Pixlr in the phone, then on FastStone on the desktop.  Rear three quarters image redacted on PaintShop Pro.)