(The discussion of Kekionga’s official Christmas story continues in part 4 of the Christmas Episode.) 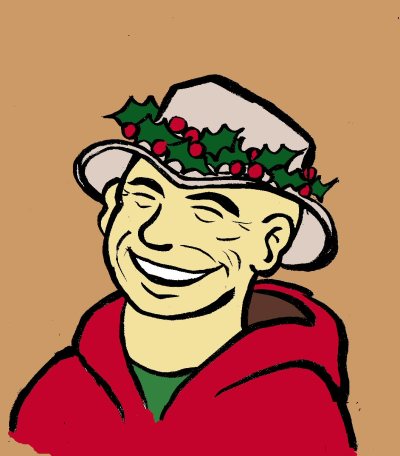 “My guess,” said another voice, deep and with some kind of weird lilting accent Iowa could never quite identify, “is that the historical models were almost certainly feral dogs, perhaps of herding ancestry.”

This was turning out to be quite the little boss/subordinate holiday outing.  Bud was certainly entering into the spirit, with a holly wreath on the brim of his usual grey Stetson fly fishing hat.  If Iowa was an apprentice Librarian under the Professor, then Jack was just as much Bud’s apprentice at whatever it was they were doing at the Junkyard.  It was more than just the salvage business, that’s for sure.

The Professor pulled himself up to as close to his full height as he could get while lounging on a bench.  “Dogs don’t make much of a story, old man.  Oh, dogs herd livestock into a pen!  Dogs eat leftover food! It’s a Christmas miracle!”

‘Not to mention,” Bud went on “that I’ve lived in this town for a long time, and I don’t remember hearing about the Christmas Wolves until sometime in the late 1940s or very early ‘50s.  And I’m pretty sure when I did it was part of a marketing campaign by the Telephone and the Chamber of Commerce to encourage downtown Christmas shopping after the dual privations of the Depression and the war years. Lots of lights, lots of loaded shop windows and a distinctive holiday story to make Kekionga stand out from the next county seat.”

“Really, Bud!” Iowa was sort of appalled.  “The Christmas Wolves are real, or at least a real legend.  We learned about them in school.”

“I don’t doubt that,” muttered the Professor, whose experience with local undergraduates had left him unimpressed with the Salt County School District.  Iowa got to hear about this a lot.

“I’m sure that there are probably some kind of historical basis—I seem to remember some little pamphlets the Historical Society used to hand out; I’m sure there’s one in the Archives somewhere.  But I think if you do some research, you’ll find the Christmas Wolves are just as real as Rudolph the Red Nose Reindeer or the Grinch.”

“Which means they’re real.”  Jack, who had been quiet up till now, spoke with solid conviction. “They’re real because they tell the truth about Christmas. About miracles happening and people, and Whos and reindeer and wolves, all celebrating together.”  Jack had away of saying things like that and making you believe them.  That was the best thing about Jack.

“And they’re ours.  Rudolph and the Grinch belong to everybody,” Iowa added. “But the Christmas Wolves are Kekionga’s.”

This entry was posted in art and culture, comics and cartooning, photography and tagged digital art, drawing, FICTION!, Kekionga and the Knotted Rope Universe, writing. Bookmark the permalink.