lucky drawings and their titles

Oh, hello, blogkateers.  How kind of you to stop by to find out whether I have been frozen solid in an ice storm or blown into Michigan in a windstorm since last we met.  I appreciate your interest, and am glad to report that I am still here in the center of my personal tundra, making comics in the company of wild dogs suffering from ever increasing levels of cabin fever.

For fun, how about a couple of “lucky drawings” from my drawing of the day sketchbook?  A lucky drawing in this context is one that just happens, drawn in ink directly on the blank page without a pencil underdrawing or even any particular idea of what the subject is going to be.

What these two drawings have in common is that they each feature a three eyed character and they each have a title that I transcribed directly onto the page from the soundtrack of the random TV show I was watching at the time.  Weird, but that’s how I roll. 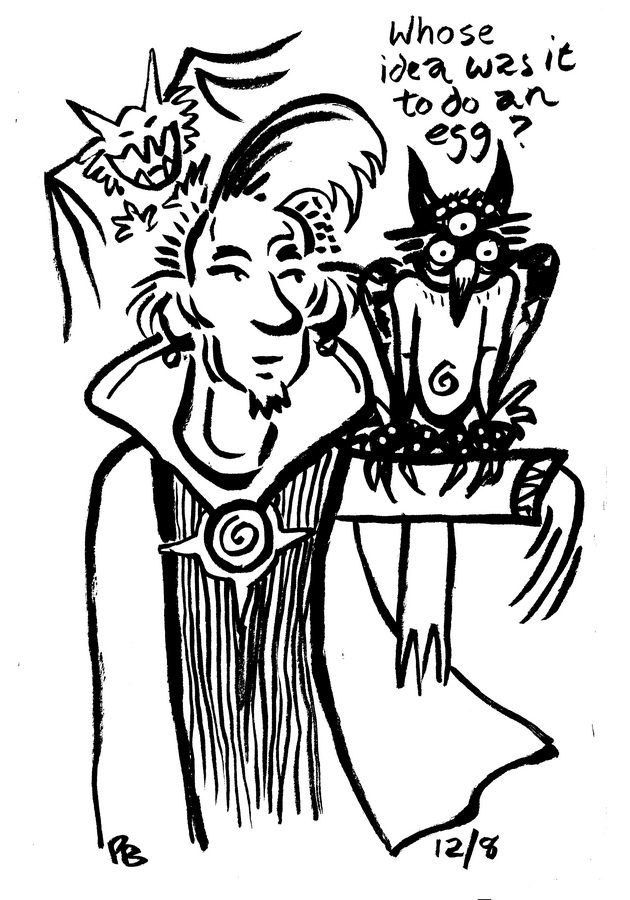 This brushwork drawing was pretty clearly drawn during a cooking competition, with one of the judges asking the question about an egg that was added to a dish at the last minute.  I can’t remember whether the egg was successful or not, but the question struck me as memorable and it fit pretty much exactly in the space above the three eyed owl thing, so on the page it went.  Hey, at least the the bat seems to think it was funny.

I actually cheated in this drawing and fixed the owl’s three eyes with whiteout the next day to make them more contrasty and also more or less the same size.  At the same time I added the little white dots for trim and to reduce the weight of some of the solid blacks that bulk up so easily when drawing freehand with a great big brush and a heavy ink.  Hey, it is my sketchbook and I will cheat if I want to cheat.

And this linework pair almost certainly appeared during that most wonderful of televised time wasters, the classic car auction.  These go on for hours over random weekend afternoons and evenings deep in the reaches of the more obscure cable sports channels.  Oddly compelling for those who like cars, and good for your spotting skills.  The engine that is “two V-6s joined at the hip” is the W-12 that powers many versions of the Bentley Continental GT.  I am not sure how this description applies to this serene three eyed creature with the mighty tusks and its wild haired human companion wearing slip on deck shoes.  Perhaps it is a comment on the closeness of their professional partnership, personal relationship, or both.

The Pilot “Penmanship” EF is small, inexpensive, Japanese fountain pen with the tiniest possible “scritchy-scratchy” nib.  It is annoying in many ways, from its tiny ink capacity and its tendency to dry out while you are actually drawing with it, but when it is working properly and you need an extremely fine line, there is no substitute.

I think my favorite thing about this drawing is the little being sitting on one of the mighty creature’s horns.

This entry was posted in comics and cartooning, writing and tagged drawing, drawing of the day, drawing tools, sketchbook world, writing. Bookmark the permalink.