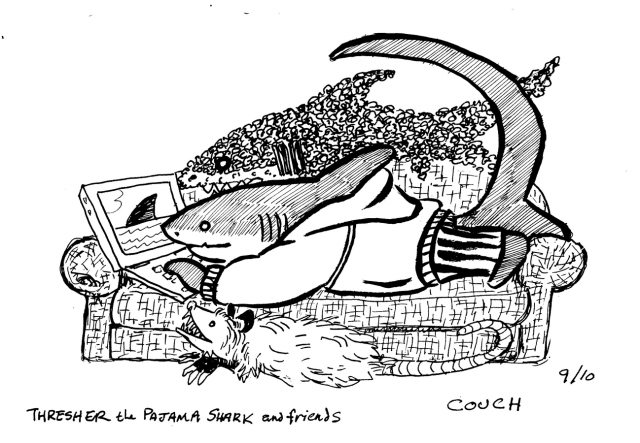 Remember how I promised you a bonus Pajama Shark cartoon to bring our Shark Week total up to seven (that is, a full week)?  I finally came up with an idea:  Thresher and his pals watch shark documentaries streaming on his laptop.  In this modern world, any week can be Shark Week.

And now it’s September, Inktober is coming, and as usual I am warming up with a set of themed drawings of the day.  It’s not quite working to a daily prompt, but it gives me a little more structure than my usual automatic drawings.  As usual, my go to theme is furniture, with a different piece of furniture featured in each drawing.  The article of domestic furnishing here is, of course, the classic crummy, tweedy American rec room couch.

Oddly, this is the first Pajama Shark drawing where I haven’t been more or less struggling to draw Thresher in various humanoid poses while staying faithful to his cartoonified shark anatomy.  Apparently a shark who is vegging out on the couch watching TV on a laptop is a shark who is doing what comes naturally– and he can be drawn as such.  Apparently the back of the same couch is also the native habitat of the toy megalodon.

This entry was posted in art and culture, comics and cartooning, writing and tagged comics art, drawing, drawing of the day, movies and TV, sharks. Bookmark the permalink.