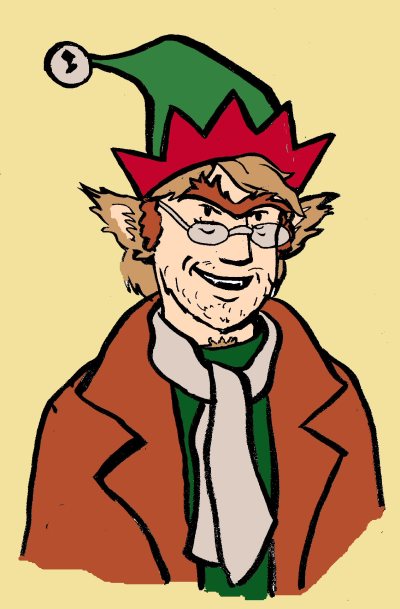 Clap. Clap. Clap.  Iowa heard the “slow clap” applause behind her and didn’t even have to turn around to know who it was.

“Very nice, Ms. Ginsberg. Well done.  You’re certainly ready to go back to Story Hour whenever you like.”

“No thanks, sir.  Never again.  But Shelley’s telling “Christmas Wolves” at the Winter Folklore Fest next month, and she’s practiced it on Gale and me so often that I couldn’t help learning it.”  Shelley could sometimes get a little intense about her projects, but, hey, roommates.

“Ms. Berry should do well with her rendition.”  Her boss, Professor Lykander, joined them on the bench without an invitation.  He was wearing a rather disturbing red and green felt elf hat and, even worse, had transformed just enough to add a pair of hairy pointed ears.  The teeth, also slightly transformed, were just the final touch.

“That’s my very favorite Christmas story,” the Professor went on.  “There are so few folk stories where the wolves are the good guys, much less tales with heartwarming holiday content.”

“I’m sure that’s true.” Iowa replied, willing him to ease off because she really didn’t want to have to explain him to Jack, who was looking at him with mild curiosity, no doubt wondering what unfamiliar local Christmas character cosplay combined an elf hat with furry brown ears and plastic vampire teeth.

“The part where the wolves eat the Christmas dinner is my favorite.”  The Professor smiled at her (with all the teeth), declaring his intention to push it.  Thanks a lot, sir. “That is, of course, if the Christmas wolves were natural wolves at all.”

Jack smiled at him, with his usual “my girlfriend’s library assistantship is great for her academic career, and her boss is a really smart guy but a bit of an oddball,” expression.  “What do you mean, Professor? What other kinds of wolves are there?  I guess they could have been Christmas spirits, like in Dickens. Or maybe ghosts or something, but then they wouldn’t have left tracks or been able to eat the Christmas dinner.”

“Think about it, Mr. Swann.  All the versions of the story that I’ve ever heard emphasize the fact that there was a full moon that Christmas Eve.”

Jack thought about that for a moment.  Iowa waited for him to put two and two together.  Finally. “Werewolves you mean?” Jack chuckled to himself at the absurdity of his own question. “Would old-timey settlers have mixed genres like that?  Putting werewolves in a Christmas story sounds more like something a modern fantasy writer would do.”

This entry was posted in art and culture, comics and cartooning, writing and tagged drawing, FICTION!, Kekionga and the Knotted Rope Universe, story, writing. Bookmark the permalink.