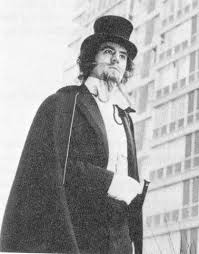 Very sad here for the last day or so, since the news came down the line that Terry Jones  has died.  Monty Python’s Flying Circus was one of the two central formative influences in my creative life as a teenager, and today it proves the theory that the things you love most when you’re in your late teens and early twenties will always be the best things.  Monty Python is the best of all possible best thing.  Graham Chapman and Terry Jones were always my favorite Pythons, and now they are both gone.

Terry Jones created any number of memorable characters in dozens of Monty Python sketches, but my two very favorites are The Bishop and Mystico  of Mystico and Janet, played by Carol Cleveland.

And then there is this drawing, which in some odd way is a drawing of Terry Jones.  I didn’t use a picture reference and didn’t really make any attempt to get a likeness, but I was definitely thinking about him when I drew it, and it depicts a character he definitely could have played.

This entry was posted in art and culture, comics and cartooning and tagged drawing, drawing of the day, history and culture, movies and TV. Bookmark the permalink.